skip to main | skip to sidebar

Noises in the night

After leaving Tuxtla Gutierrez, we made a few quick stops. The first stop was San Cristobal de las Casas, one of my favorite places. We didn't stay long, but it was nice to have one last walk around the beautiful colonial town. 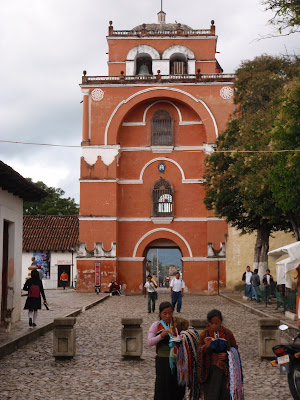 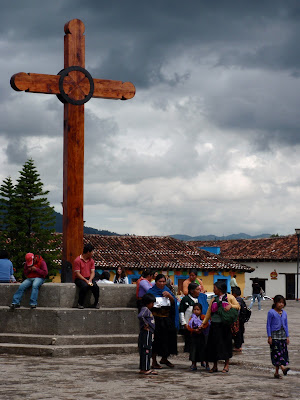 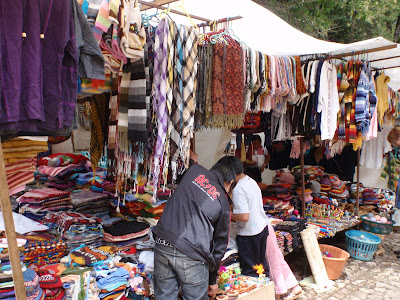 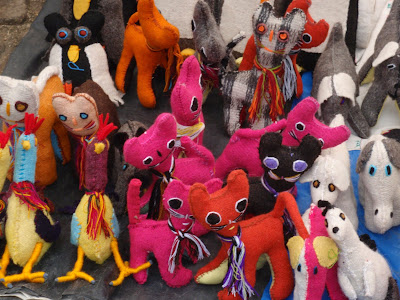 Then a bit later on we stopped again in Agua Azul, where the water wasn't the beautiful blue we had heard it normally is, probably due to the recent storms.

This is what it is supposed to look like..... 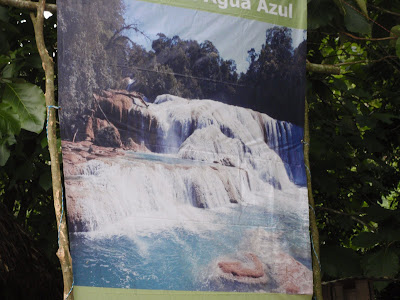 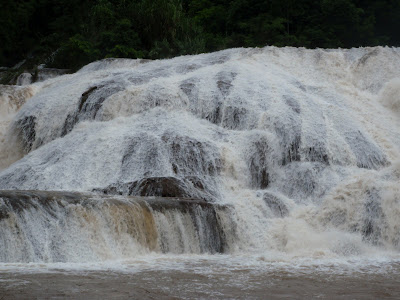 But it sure didn't stop the furry one from having a good time. 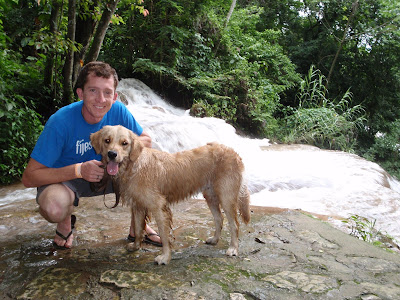 Of course there was some fun in the car along the way. 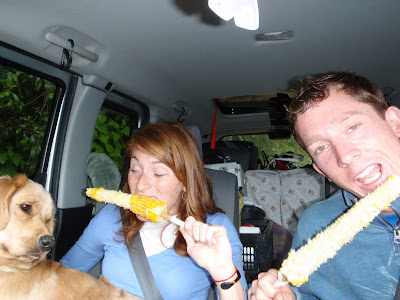 And then several hours later that afternoon, we arrived at Palenque. It was a long, slow drive through country roads and we were all happy to finally get out of the car! We set up camp at the Mayabell Campground about a kilometer away from the ruins and settled in for the night. It's been a while since we popped up the old ECamper and done this whole camping thing with the car stuffed full like a Chipotle burrito, so it took us a while to get into the groove. First we have to empty out the box and the back. Then we pop the camper, relocate some things from the box to the front seats. Finally we get around to making up the bed and setting up the canopy, a must in this rainy weather. All the while our traveling companion is off exploring and wrecking havoc in the campground.

She finally tuckered herself out. 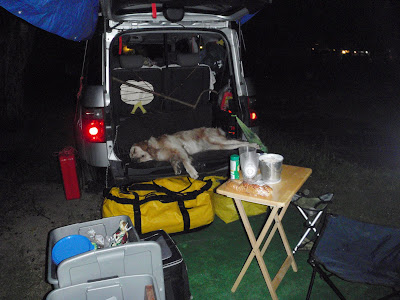 Mayabell is a decent campground and it was nice to have other campers around since it is the off season. There was a cute restaurant on-site with live music that we enjoyed from our location just a hundred feet away or so. The best part though was that the campground is surrounded by jungle, so the wildlife lurks. We didn't really notice any signs of it until around 4am when we awoke to what honestly sounded like we were getting invaded by gorillas. Fortunately I had read that howler monkeys often "visit" in the night, so we knew exactly what it was. They carried on for a good 20 minutes or so and then off they went and we set back into dreamland.

The next morning after showering up in some less than satisfactory conditions, we packed up camp and drove down to the ruins. It was super hot and I was nursing a migraine, but I think we both agree that Palenque was some of the most interesting ruins we have visited yet. The cool thing being that you could actually enter inside many of the temples. I lasted a couple of hours and then bailed out to go rescue our travel companion from the heat. Ben stayed for a bit longer and took this video.

Palenque from Krista on Vimeo.

A bit later we reunited and made our way into town for some tacos before hitting the road again toward the next destination, a bit unsure exactly where it would be. We passed through Villahermosa and stopped by a sort-of campground in Agua Dulce that didn't end up being very legit or secure, so we carried on. By this point it was really raining hard and we weren't sure where to go, so we pushed on to a PeMex station (gas station) a couple of hours down the highway. Petroleum is nationalized in Mexico so all of the gas stations are government owned, all called PeMex. They are actually quite nice and always have an area where it's ok to park for the night, kind of like Walmart in the US. Most of the time there is even a shower available, although we haven't yet experienced one and there is always an armed guard. It's certainly not paradise, but it works in a pinch where there are no campgrounds or if we're just looking to sleep and drive again in the morning.
The next day we visited Veracruz, a not so great port city on the Gulf of Mexico. We walked around a bit, had lunch and then hit the road again toward another nearby city, Xalapa. Set up in the mountains, Xalapa is not really a tourist destination, but the cool temps suited us a bit better and we enjoyed several of the nice parks the city has to offer. We checked into the Xalapa Hotel for a good night's rest and some internet usage and made the most of being out of the car!

This Mexican ship was in the port in Veracruz.
Ironically we saw it first in Cartagena, Colombia a month or so ago. 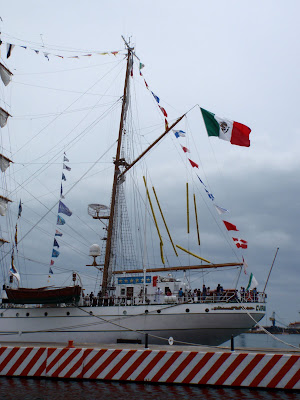 Somebody was wishing she could take a dip in the water. 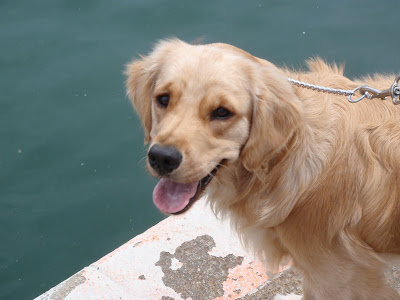 The view in from the central park in Xalapa. 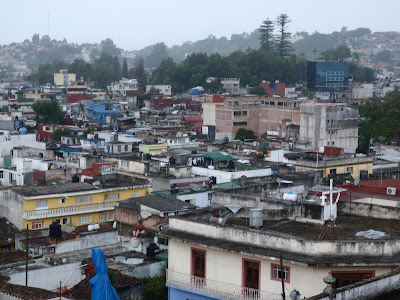 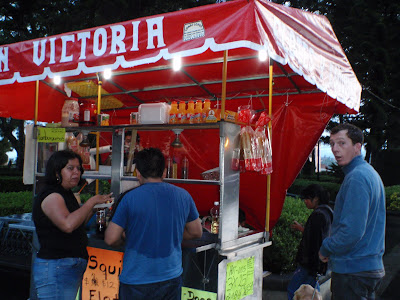 After taking care of some business back in the States the following morning and picking up our clothes at the lavandaria (laundry mat) we cruised on down to a neighboring town, Coatepec. Not much happening there for tourists again, but we strolled around a while, ate some delicious Michoacana ice cream (one of my favorite things about Mexico) and then pushed on to Puebla. Not the most exciting of all the days in our travels, but such is life on the road.
Posted by Krista at 9:57 AM

Krista
Gypsies at heart, we’ve packed up our Colfax Avenue apartment, left our jobs & said our goodbyes with hopes of making a difference in the lives of many as well as our own. Share in our adventure as we uproot ourselves from the mile high city & road trip through Mexico, on our way to a new home & new way of life in Guatemala. UPDATE: After 2 amazing years of living and loving in Latin America this family of three is learning the art of settling down in Charlotte, NC where we purchased our first fixer home. Stay turned to follow our adventures of a different sort - exploring another totally new culture (the South!) & DIYing the heck out of our home!

"Talk about a dream, try to make it real."
-Bruce Springsteen

"You must be the change you want to see in the world."
- Mahatma Gandhi 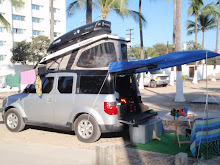 This is a Flickr badge showing public photos and videos from krista & ben. Make your own badge here.

"Go, see the world.
You will never regret it."
-Irfan Khan, The Namesake

"It's not having what you want. It's wanting what you've got." ~Sheryl Crow

"Well I never seem to do it like anybody else, maybe someday (someday) I'm gonna settle down. If you ever want to find me I can still be found, taking the long way around."
- Dixie Chicks

"It's not having what you want,
It's wanting what you've got."
-Sheryl Crow

Stops Along Our Way

"If you wish to experience peace,
provide peace for another."
-The 14th Dalai Lama

The Way We Roll